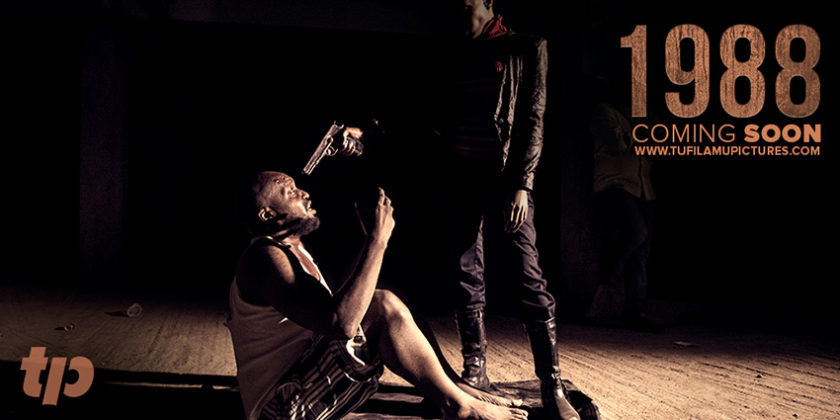 The movie 1988 premiered at an invite-only event on Saturday evening at Metta Space in Nairobi Kenya. The Red-Carpet affair was attended by notable names in the Film Industry

The film by Tufilamu Pictures written by Charles Chanchori and Directed by Robert Asimba, is the story of Khoti Babu, a 21-year-old law student at the University of Nairobi, who gets on the wrong the side of the law for bad-mouthing of the government.

Khoti is subjected to brutal treatment and blackmailed into turning in his Marxist professors at his university, in exchange for immunity and a secure government job.

1988 is a story  of ordinary Kenyans who dared to stand up to the autocratic regime of the 8os infamous for dealing ruthlessly with any form of dissidence.

The film is a stark reminder of what can go horribly wrong when a society forgets its humanity and turns on itself. The film can also be said to be a modern day adaptation as democracy and dictatorships often have blurred lines between them for modern African Countries.

Starring Helena Waithera, Mike Njeru, Raymond Ofula and Qwachezz Kwach, 1988 is a simulation of the late 80’s Kenyan society, that was too often characterized by civil rights infractions against free speech that were often were associated with violent torture at the infamous Nyayo House Chambers.

Apart from the movie premiere, the event featured interviews from the Nyayo Torture victims, Silvano Oduor and Christine, who shared with the audience their painful experiences at the chambers.

Speaking at the premiere, Robert Asimba Director of 1988 film said that at first the film was meant to have been released last year but the plans were held back because of the political climate in the country at the time.

“It is a political journey to some extent. We are showcasing a different shade of what happened three decades ago. We hope to set a precedent for future historical adaptations of a genre that can rightly be termed as unpopular. 1988 is a modern-day adaptation, illustrating the blurred lines between dictatorship and democracy in modern African countries,” he said.

He also added that the whole project was self funded by Tufilamu Pictures. They are currently seeking funds so that they can come up with a 90 minute 1988 feature film that could take up to 22 days shoot.

Mike Njeru, who plays Khoti, described his role as a unique experience which has made him appreciate the freedom he enjoys today as a Kenyan.

“It roughly took us 14 hours to come up with the short film and while in there I had to switch my mind and try to feel the experience,” he said.

1988 Film is the is the seventh production by Tufilamu Pictures. Other notable productions include: Spensa, Confessions, Sage, Structures of Hope, WILAY and The Yard.