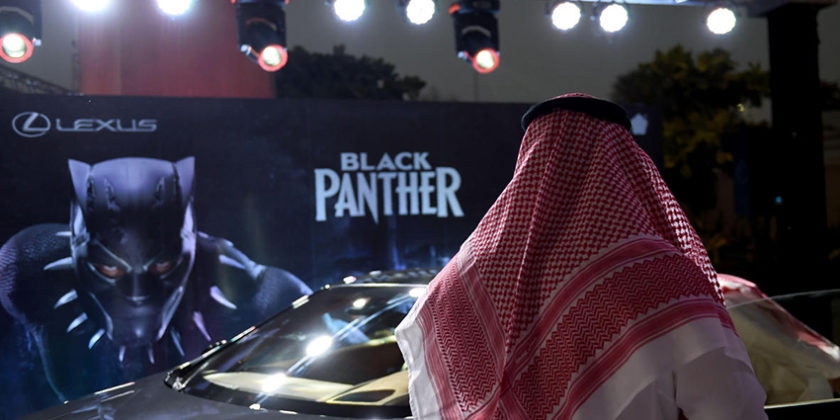 After a 35-year ban on cinemas in Saudi, AMC opens first theater with Black Panther

After a 35-year ban on cinemas in the Kingdom of Saudi Arabia, AMC opened its first theater in Riyadh on April 18th.

With the doors of the theatre opening to dawn a new era, the private, invitation-only screening also premiered Hollywood’s blockbuster “Black Panther” in the country. This marked one of the clearest moments of change to sweep the country in decades for many film makers and other people in the film industry.

The ban after 35 years was lifted by Saudi Arabia’s Ministry of Culture and Information last week after the ministry made an announcement thet they had granted the first cinema operating license so that U.S. industry leader AMC, the largest theatrical exhibitor in the world, can operate cinemas in Saudi Arabia.

This also followed the signing of a memorandum of understanding (MoU) between AMC and the Public Investment Fund (PIF) in December 2017 to explore potential trade cooperation opportunities.

With a population of more than 32 million, the majority of whom are under the age of 30, Saudi Arabia is set to become the largest market for movie-goers in the Arabian Gulf region.

In a landmark decision in December, the Ministry of Culture and Information announced that commercial cinemas would be allowed to operate in the Kingdom from early 2018, for the first time in more than 35 years.

The decision is part of Saudi Arabia’s social and economic reform program under Vision 2030, spearheaded by His Royal Highness the Crown Prince Mohammed bin Salman, who is currently on an official visit to the United States.

“The granting of the first license marks the opening of very significant opportunities for exhibitors. The Saudi market is very large, with the majority of the population under the age of 30 and eager to watch their favourite films here at home,” said Dr. Awwad Alawwad, Minister of Culture and Information in a press statement.

He added, “The aim of Saudi Vision 2030 is to improve the quality of life for Saudi families by providing an array of entertainment opportunities. The restoration of cinemas will also help boost the local economy by increasing household spending on entertainment while supporting job creation in the Kingdom.”

Vision 2030 has established a goal of increasing annual Saudi spending on cultural and entertainment activities from the current 2.9% of total household expenditure to 6% by 2030.

Adam Aron, CEO and President of AMC Entertainment said, “AMC has been extraordinarily impressed by the imagination to move Saudi Arabia forward as detailed in Vision 2030, and we have been emboldened by the professional, gracious and warm welcome we have received from the Ministry of Culture and Information, from the Public Investment Fund and from every Saudi institution and individual with whom we have been in contact. We greatly look forward to serving the people of Saudi Arabia with truly world-class theaters all across the Kingdom.”

AMC’s entry into the Kingdom of Saudi Arabia is occurring in partnership with the Public Investment Fund through its subsidiary, the Development and Investment Entertainment Company.

The move to allow movie theaters opens up a big domestic market, which could approach up to USD $1 billion in annual box office sales, which leading cinema chains are keen to break into as it is the largest market in the Arabian Gulf region.