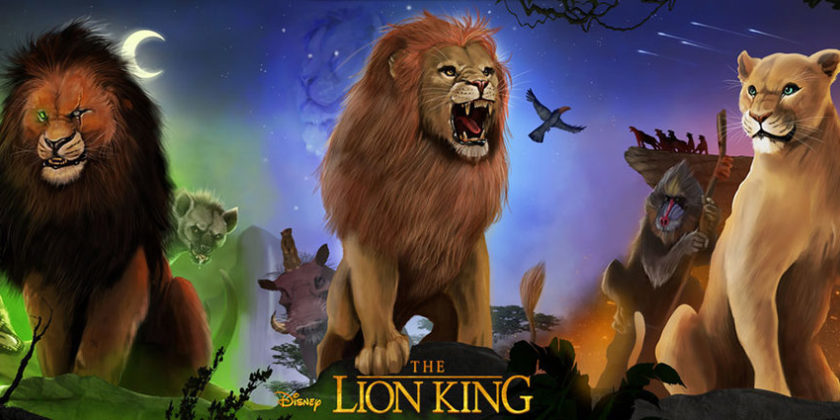 Directed by Jon Favreau’s, who is also the director of Jungle Book, the all-new The Lion King journeys to the African savanna where a future king must overcome betrayal and tragedy to assume his rightful place on Pride Rock.

The trailer became the most-viewed Disney trailer debut ever after racking up a massive 224.6 million global views online in only 24 hours, as well as being the second most-viewed trailer from any studio ever behind Avengers: Infinity War’s 230 million views in its first 24 hours.

Not so different from the 1994 movie trailer, the 2019 trailer focuses on the iconic moment of Rafiki introducing the future king, Simba, to the animals of the African savannah. Reprising his role from the original movie, the trailer also featured a voiceover from James Earl Jones as Mufasa.

Favreau, has brought together an incredible cast for his second Disney remake, including stars like Donald Glover as Simba, Beyoncé as Nala and Chiwetel Ejiofor as Scar, among many others.

James Earl Jones, Hans Zimmer, and Elton John are the only people who worked on the original animated film who have come back with their respective roles, as the voice of Mufasa, the composer of the film, and songwriter respectively.

Lion King 2019 will be Jon Favreau’s second live action Disney movie based on a Disney animated movie after directing The Jungle Book (2016).

Plans for a remake of The Lion King were confirmed in September 2016 following the success of Favreau’s remake of Disney’s 1967 animated film The Jungle Book. Much of the main cast signed on in early 2017 and principal photography and production  began in mid-2017 on a blue screen stage in Los Angeles.

The production focused on using lot of new technology including  “motion capture,  virtual-reality and Augmented Reality technologies. The movie will also feature four songs from the original film would be included in the film: “Can You Feel the Love Tonight”, “Hakuna Matata”, “I Just Can’t Wait to Be King”, and “Circle of Life”.

Some interesting facts that we thought you should know. According to IMDb, The 2019 movie will feature three hyenas Shenzi, Kamari and Azizi who are named after the Swahili words for “savage,” “mighty” and “moonlight.” Kamari and Azizi were originally named Banzai and Ed in the 1994 animated film, but were given African names for this film.

To some interesting news though, unlike the 1994 original animated film, all the lions in this production will be voiced by actors of African descent, whereas in the original only Mufasa, young Nala, Sarafina, and Sarabi were. This also applied to young Simba, but only with his singing voice.

Lion King 2019 will also feature John Kani (Rafiki) unlike the original animated counterpart where he had been voiced by an American actor (Robert Guillaume) using a Swahili accent.

John Kani and Florence Kasumba (Shenzi) who have both starred in features about the comic book hero the Black Panther. Kani starred as T’Challa’s father T’Chaka in the Marvel Cinematic Universe films, while Kasumba played Ayo in Black Panther

The two actors will also be the second and third actors who’d been in a Black Panther film to appear in a film by Jon Favreau. The first had been Lupita Nyong’o who appeared fellow Disney live action reboot The Jungle Book (2016), all of whom appeared in Black Panther (2018) released a year prior.