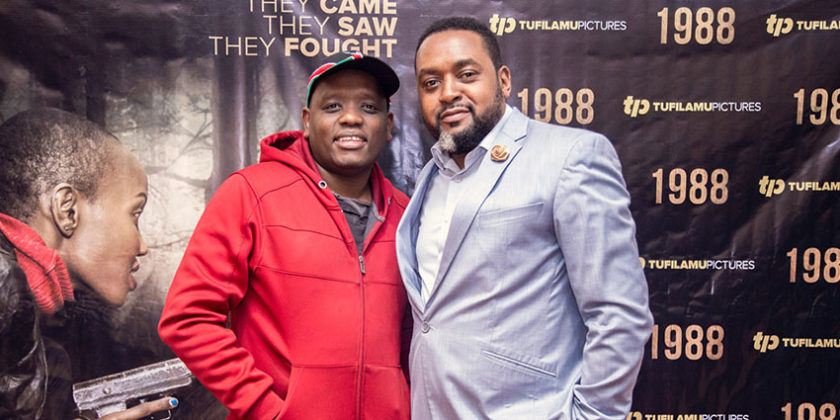 1988 Second screening; this is how it went down

Filled with Pomp and color on 16th June 2018, Tufilamu Pictures held the 1988 second screening. 1988  a short film that highlights the happenings of the 80’s Kenyan society, that was too often characterized by civil rights infractions against free speech that too often were associated with violent torture at the infamous Nyayo Chambers.

Held at The Anga Imax, Diamond Plaza, Parklands Nairobi, 1988 second screening attracted over 100 people from all walks of life. At the entrance of the Anga Imax, the team laid a scarlet-hued carpet with a 1988 back-drop banner giving the attendees a ‘Hollywood red carpet treat’ that filled the ambience with more glitz and glamor.

Speaking at the screening, Dennis Itumbi, Director of Digital Communication at the Office of the President congratulated the team behind the film saying that unveiling the happenings of 1988, was a great step to help many understand how far we have come as a country.

He added, that this marked a growth in the Kenyan film industry and that the Government was willing to support the team where necessary.

The short film was 15 minutes long and based on a true story, the film was followed by 15-minute-long interview carried out with three of the 1988 Nyayo Chamber detainees.

Written by Charles Chanchori and directed by Robert Asimba, 1988 is the story of Khoti Babu, a 21-year-old law student at University of Nairobi, who gets on wrong the side of the law with alleged bad-mouthing of the government through poetry.

Typical of numerous treasonous charges in this leg of Kenyan history, Khoti is subjected to brutal treatment and blackmailed into turning in his Marxist professors at his university, in exchange for immunity and a secure government job.

Law enforcement officers were often the henchmen for this regime and they were greatly feared by all, save for a select few who were never cowered into fear for exercising their constitutional right, that is, free speech. 1988 can also be said to be a modern-day adaptation as democracy and dictatorships often have blurred lines between them for modern African countries.