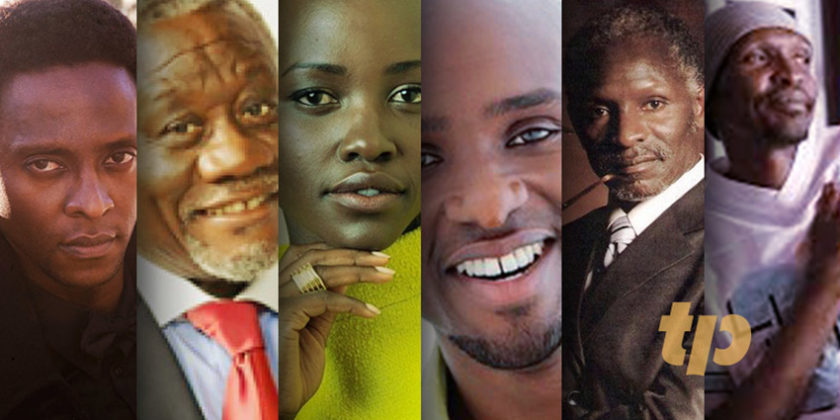 Kenyan Actors that have casted in Hollywood movies

Kenya is well known for its great victory when it comes to Olympics and its diverse wildlife. The country is also known for its famous people coming from the country.

From as early as the 90s Kenya is also home of prolific Actors and Actresses who have who have graced the big screens and have been featured in the Hollywood movies.

Here is a list of some actors featured in Hollywood Cinemas and some whom we have been privileged to work with:

Edi Mue Gathegi was born in Kenya on March 10, 1979, and relocated to California in his youth. He studied acting at New York University, and soon after began landing high-profile roles on television shows like CSI: Miami and House M.D. Gathegi’s big break in film came when he was cast as Laurent in Twilight (2008). He went on to appear in The Twilight Saga: New Moon (2009), and has since earned roles in feature films such as X-Men: First Class (2011). He also portrays the Haitian character Ronald Dacey on StartUp

Raymond Ofula has been a professional actor in Kenya and beyond for over 40 years. Some of the international films (Hollywood films) he has featured in include: Tomb Raider II starring Hollywood actress Angelina Jolie, White Maasai, To Walk with the Lions, Oscar award wining film, the Constant Gardner and hundreds of local Kenyan Films. Ofula has also starred in Kenyan television series such as Noah Melis Heart and Soul, Makutano Junction, Better Days,Nairobi Law, Tabasamu, Changes, and Mali.

He has also feautured in Wintereiss a German TV series and South African-Nigerian hit TV series: Jacobs Cross. Ofula’s first major role was the role of Noah Meli, a grandfather, bedridden with aids who reveals his condition to his teenage grandson, advising him on living a virtuous life.

Lupita Amondi Nyong’o was born March 1, 1983 in Mexico City, Mexico, to Kenyan parents, Dorothy Ogada Buyu and Peter Anyang’ Nyong’o. Her father, a senator, was then a visiting lecturer in political science. She was raised in Kenya. At age 16, her parents sent her back to Mexico for seven months to learn Spanish. She read film studies at Hampshire College, Massachusetts and, after working as a production assistant on several films, graduated from the Yale School of Drama’s acting program. In 2013, she impressed cinema audiences in her film debut, as brutalized slave Patsey in acclaimed director Steve McQueen’s 12 Years a Slave (2013). She was also the lead in MTV’s award-winning drama series, Shuga (2009), appeared in the thriller Non-Stop (2014), and will have roles in the big-budget films Star Wars: The Force Awakens (2015) and The Jungle Book (2016).

Lupita’s stage credits include playing “Perdita” in “The Winter’s Tale”, (Yale Repertory Theater), “Sonya” in “Uncle Vanya”, “Katherine” in “The Taming of the Shrew”, as well as being in the original production of Michael Mitnick’s “Elijah”. Lupita also played the female lead, Nakia, in the 2018 superhero film Black Panther (2018).

Before he became synonymous with Shuga and Mali series where he was the casting director, Lenny Juma first featured in Hollywood’s Tomb Raider: Cradle of Life. Juma plays the Turkana elder who Lara, played by Angelina Jolie, approaches seeking information about the Cradle of Life where the orb that leads to the mythical Pandora’s Box is said to be hidden.

Lenny has also featured in The Air Up There and the Constant Gardener. In Indiana Jones Chronicles, he plays the witchdoctor, and Colonel Bao in Banged Up Abroad.

Charles Gitonga Maina (born 1976) is a 6’10” Kenyan-born actor best known for his co-starring role in The Air Up There. On the set of this film, Maina’s character Saleh is taught the “Jimmy Dolan Shake and Bake,” a basketball move that led his team to victory.

Maina also guest starred in the episode “Lostland” of the television series SeaQuest DSV, as Professor Obatu and his ancestor Deucalion.

Charles Gitonga Maina attended college at Lynn University on a basketball scholarship from 1997 to 1999. His coach would not allow him to use the ‘Jimmy Dolan Shake and Bake’ move in competition games. Maina still holds the Lynn University record for most blocks in a single game (11), which he achieved against Barry University on December 7, 1998. He left the country to try out for a team in Greece and was unable to return to the US due to visa problems. Since then, he has returned to Kenya.

Owiso Odera got a role in The Originals; a spin-off from Vampire Diaries. He however, passed on in 2016. He was a Los Angeles based actor whose television credits include Blue Bloods (CBS), The Unit (CBS),  Romeo and Juliet (the Public Theater / New York Shakespeare Festival).